Want a free consultation? Enter your email and phone number below and I'll reach out. You can also text or call me at 631-428-1978.

What Does It Mean When An SBA Loan Has Been Charged Off?

Welcome friend!  If you’re searching for answers about SBA loan default and forgiveness, you’ve come to the right place.  My name is Jason Milleisen, founder of Distressed Loan Advisors.  I worked in the “workout department” of the largest SBA lender in the country before I decided to leave the dark side and start working on behalf of small business owners.  That was 10 years ago.  I handle virtually nothing other than the SBA OIC process.

But enough about me.  If you are looking for answers, let me point you in the right direction.  These are the 2 most popular articles on this site:

If you are into podcasts, I have one.  All valuable content, no fluff.  You can listen to episodes here, or subscribe to the show wherever you get your podcasts.

On to the wonderful world of SBA loans and charge offs…

One of my all-time favorite shows is Seinfeld. There’s one particular episode when Kramer attempts to get Jerry a new stereo by insuring it, then breaking it. When Jerry objects to mail fraud, the following conversation ensues: 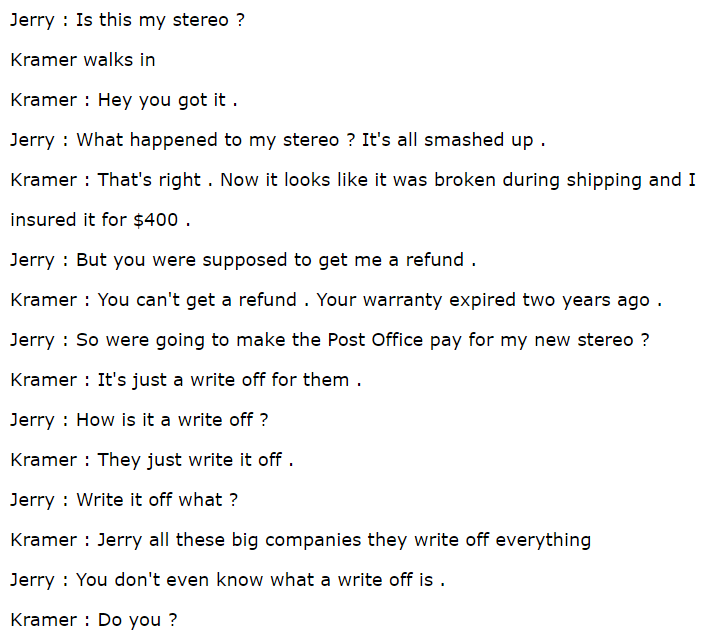 I reference write-offs to people all the time, and almost universally think of this exchange.  I think it was hilarious because in large part, it’s true.  We’ve all heard of a write-off, but many people don’t actually knows what it means.

The main point of charging-off a debt is so that the financial profile of a bank is not misrepresented.  Let’s look at an example:

Let’s say Awesome Bank made $100 Million worth of loans.  Investors say, great, they will make a ton of money off the interest!

But what if out of the $100 Million, $75 Million of it were loans to companies who unsuccessfully tried to bring back VHS tapes.  Before you can say “outdated!”, the borrowers on that $75 Million stop making payments because nobody wants their product.

If you were an investor, would you want to know that 75% of Awesome Bank’s loans were not going to be repaid?  Of course you would.  And that’s exactly what a charge-off does.  It tells the world that those loans are not assets because they are unlikely to be repaid.

I’m sure you don’t actually care about what a charge off is from an accounting standpoint.  I know I didn’t until just the other day.

I have a client who had 2 SBA loans, which is not uncommon.  Of course, when the business closed, he stopped paying on both loans.  After a period of time passed, he finally received the 60-day letter.

Typically, if a client has 2 SBA loans, they get 2 separate letters from the SBA.  But he only got 1.

That doesn’t sound like a big deal but it turns out that, from a logistical perspective, it actually is a big deal.  I submitted the OIC package and got this response back from the SBA: 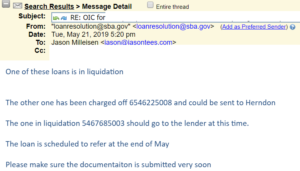 Ugh.  I Wasn’t Counting On That

In every case I’ve seen up to this point, the whole charge-off thing is an all-or-nothing scenario.  Either the bank charges all the debt associated with a particular borrower, or they charge-off none of it.

From a logistical perspective this complication has a few implications:

So that’s your charge-off lesson for the day.  If you get a 60-day letter, that means the loan was charged off.  If you haven’t yet, the loan may still be in “liquidation” status with the lender, which means you’ll either have to deal with the lender, or wait until they flip the magic charge-off switch.