Want a free consultation? Enter your email and phone number below and I'll reach out. You can also text or call me at 631-428-1978.

SBA Loan Workouts: Can’t We All Just Get Along?

I’ve been on both the lender side and the borrower side (as a consultant) of SBA workouts.  When I worked for lenders, I would sometimes forget those thick files that sat on my desk represented real people.  For all the lenders out there who can relate, here are a few reminders:

Given the severe stress that business owners are under, I liken role of the workout officer to that of a police officer.  While it’s certainly your job to enforce the rules, everything runs much smoother when you de-escalate a tense situation.

You may be thinking “who cares, Jason?  A workout officers job is to maximize recovery for the bank and the SBA, not make friends.”  I’d argue that treating people kindly during the process, it DOES result in greater recovery.

My client got the email above.  We were super confused.  In addition to the workout officer incorrectly stating that an OIC would need to be handled through the Treasury once the SBA repurchases the loan (definitely not true, it makes a stop at the SBA first), she had no idea that a different bank employee had already sent my client a demand letter instructing us to deal with the other person.  So we responded: 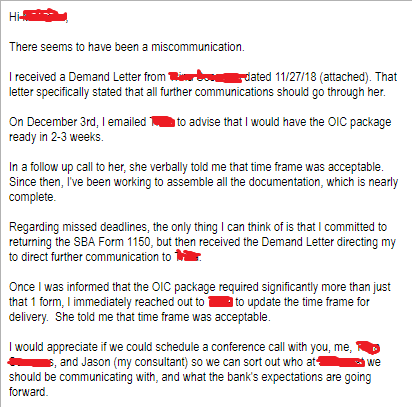 There’s more shenanigans I can show you, but you get the point.  This bank, on top of not understanding the process, was unnecessarily aggressive.  Rather than simply reach out to us, she sat silent and then threatened legal action when we provided an update.  To me, this is a case of being overly aggressive in an attempt to cover up incompetence.

Since the workout person clearly wanted nothing to do with an OIC (probably because she had no idea what to do), it should come as no surprise that our OIC was rejected.  They countered with a lump sum equal to 82% of the loan balance in cash, or making payments for 15 years.  Considering that my client has no cash available, their lump sum counteroffer was preposterous.

As a result of the above, my client is ready to give up.  He offered to pay about 25% of the loan balance to settle, which is very reasonable given his situation.  He’s talking about bankruptcy and walking away from him house.

Does it sound to you like this lender is making an effort to maximize recovery, or get it off their plate because they have no idea what they’re doing?  I’d argue it’s the former.

Now, let’s look at the polar opposite situation.

2) Awesome Nice Bank – From the beginning, it was clear that this banker gets it.

My client had a retail shop that closed, and owes the bank close to $400K.  Due to some lagging by my client, the bank filed suit against him.  He finally realized that he needed to face this issue, so he engaged me to help.  I reached out to his banker, who couldn’t have been nicer.

Since we first spoke, the lender has been a pleasure to work with.  They understand the process, respond to emails promptly (and with a respectful tone), and have been very open about their thoughts and concerns.  Just yesterday, they emailed us to advise that the bank had approved the OIC, and is sending to SBA for final approval.

The way Awesome Nice Bank is acting is an example of how all banks should treat clients who are struggling to pay, but want to do what they can.

Borrowers in default are like wounded animals.  They are under extreme duress.  If a lender can de-escalate the tension, it typically results in a much more open and cooperative borrower.

Don’t get me wrong folks – – this lender is not a pushover, and they are not rubber stamping the OIC.  We made a fair offer, and they are making a smart business decision by accepting it.

I know for a fact that my client was more willing to work with this lender because of the respect they showed him.  The lender even told my client that they understood that the failure was not his fault.   That small gesture was all it took for my client to believe his lender was going to give him a fair shake.

If a borrower is being evasive, uncooperative, or fraudulent, I understand why a lender would come come out with guns blazing.  When it’s clear that they are intentionally taking actions to cause financial losses to the bank, I have no sympathy for those types of people.

But when a good person has simply, through no fault of their own, fallen on hard times?  I wholeheartedly believe that the highest and best recovery will come when a lender treats a borrower with kindness and respect.

The vast majority of borrowers who default are good people who had something bad to them. All they want is an opportunity to pay what they can, so they can move on with life.

So please lenders, just put your swords down for a minute.  It’ll typically result in the best outcome for everyone.

Fraud Is Not An SBA Default Strategy